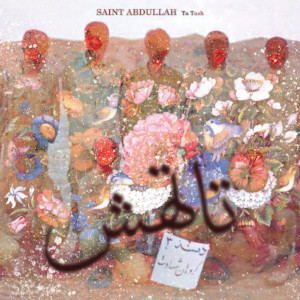 “These sounds are accidents. There was intent only in so far as a simple idea, which is really around bringing together factions and forces in Iranian, Islamic culture, under one roof, to have them play nice together, to co-exist, float as one and to complete each other, in order to tell a story called Ta Tash, which is Farsi for To The End.

There’s definitely elements of devotional sounds that we weave into the tracks. Stories of the past. But whether this is devotional music, at large, I don’t know about that. Like, you’re not going to be hearing Vivid Persian Dreams blasting in a mosque anytime soon. But maybe devotional in a more personal sense.

It captures the essence of a sentiment during the brutal 8-year war between Iran-Iraq. It is also defensive, and perhaps in response to existing in the US over the past 7 years. But also because of it. Therein lies the beauty of this country. Today, let’s talk about this. Glass half full. This country. This beautiful, incredible, fucked up country.

The artwork is part of an edited collection of images pulled together from the years of the Iran-Iraq war. A collection of 15 works of art titled Postcards from the Outer Boroughs. Some of these images belonged to our family, others we found by forming a dialogue with the actual men who fought in battle with our family members. Men who remember those last, precious moments of the lives of our loved ones. We were curious to somehow learn more about that moment from those who served.

These Postcards are the culmination of the hard work and imagination of Ghalamdar, a wonderful Iranian visual artist based in the UK. In them, we explored how we could modify these quintessentially Iranian motifs to lift the weight of emotion, the weight of innocence, of loss, of blind faith, to the end? How do we connect an Iran of the past, Iran of the books, to the Iran of today? After all, we are of the same blood. As a by-product of mixing media, mixing contexts, we attempt to playfully bridge this gap, if ever so slightly.” – Saint Abdullah