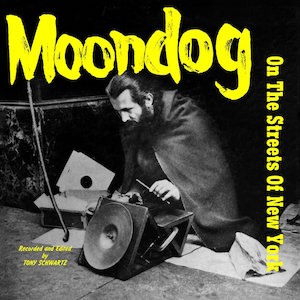 On The Streets Of New York

Stap me! When you think you’ve heard it all, someone comes up with more earth shattering music, restoring your faith in humanity (well, almost). Back in the early 2000s, after locating those first Moondog 78s, and adding them to the mix at Honest Jons, assembling the compilation that became The Viking of Sixth Avenue, was a musical cloud nine – a voyage of discovery, attempting to chart the worlds that Moondog had created. The fact that I had to sleeve them all is another story.

Mississippi expose us to some never before heard material. It’s killer grade, recorded by yet another genius, Tony Schwartz, the pioneering Folkways field recordist; the first man to record Louis Hardin, aka Moondog; who in the 1950s also recorded a day in the life of a dog [canine] and a New York cab driver, among many others.

“Behold! A survey of Moondog’s earliest recorded works – many of them unreleased until now – through a collaboration by Mississippi Records and Lucia Records. From 1954 – 1962 field recordist Tony Schwartz frequently checked in with Moondog, his favorite street musician. Tony Schwartz made recordings of Moondog’s earliest compositions as they were coming into focus. Sometimes these recordings were made right on the street as Moondog busked, sometimes they were made in Schwartz’s studio, and sometimes they were made on NYC rooftops. The resulting recordings were deposited at the Library Of Congress, as part of the Tony Schwartz Collection in 2006 when Schwartz passed away, and this record was culled straight from these original tapes.

Side one kicks off with an unreleased version of Moondog’s classic composition “Why Spend The Dark Night With You?” followed by the first ever complete recording of his “Nocturne Suite,” a beautiful piece of classical music performed with members of the Royal Philharmonic. The side ends with the complete “On The Streets Of New York” 7” EP, which was released on Mars records in 1955 and subsequently re-released by Honest Jon’s Records in 2004 on their excellent Moondog anthology. Side B features sketches of Moondog compositions never released, many with the man himself howling and chanting over his homemade percussion set.

Moondog’s music is as universal as it gets – part classical, part Native American, part European folk, and part something completely unique. Moondog is one of the towering figures of 20th century music. This record comes with liner notes featuring never before released interviews with Moondog by Tony Schwartz and is housed in an old school “tip on” cover. All tracks fully licensed from the Library of Congress.