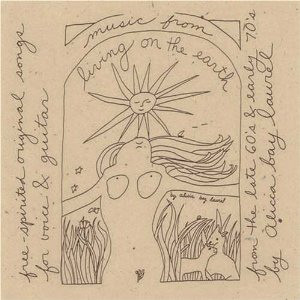 Music From Living On The Earth

Alicia Bay Laurel, writer and illustrator of one of the classic books of the 70s back-to-the-earth movement, Living On The Earth, is also an accomplished singer, songwriter and guitarist, the latter skill honed by studying with John Fahey. The songs on Music From Living On The Earth were composed alongside the book, permeated by the sun and soil of commune life. Bright and earthy paeans to the natural world, featuring ABL’s pure, strong and uplifting voice with fluid, confident and deft steel-string acoustic guitar fingerpicking, her style showing that she learned well from Fahey. She also collaborated with San Francisco Tape Music Center co-founder Ramon Sender Barayon, who contributes the 40-voice choral arrangement for the closing track. Although these songs were written in the seventies, Music From Living On The Earth was actually recorded in 2000 and first issued as a self-produced CD, then later issued in Japan on EM Records and is now out of print. This 15th anniversary first-time vinyl version, with new liner notes by the artist as well as English and Japanese lyrics, allows listeners to again hear ABL’s blues, jazz and Indian music influences meld with folk roots to glorious effect.