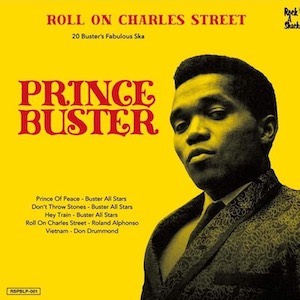 Hot new collection of classic and previously unreleased Prince Buster productions. Continuing from where they left off with Buster’s ‘Let’s Go To The Dance’, the latest Ska, ballad and shuffle selection from the ‘King Of Ska’ Prince Buster.

The compilation features beautiful vocals and instrumentals from the likes of Prince Buster, Derrick Morgan, Patsy, Slim Smith, the mighty Don Drummond and the Buster All Stars.

Several incredible tracks have never been released before.
The alternative and raw take of “Prince Of Peace”, a deadly and previously unreleased instrumental by the genius Don Drummond titled “Vietnam”, a truly wicked instrumental “Charles Street Cowboy” (dig the cowbell!) A lovely duet with Prince Buster and Slim Smith “I’m Sorry”, plus a deadly take of “Summertime” by the Buster All Stars.

Also included are classics like the Ska version of “Hey Train”, a cover version of Duke Ellington’s “Take The A Train”, which was only pressed on dub plate handed to the core sound men of Prince Buster’s “Voice Of The People” sound system.

Roland Alphonso’s “Roll On Charles Street” is again from dub plate and apparently recorded at the same period as the masterpiece and rude boy classic “Rude Rude Rudie” (aka “Don’t Throw Stones”). The classic “Stop That Train” by The Spanish Town Skabeats, the original take of the famous Jamaican rock steady classic by Keith and Tex, for Derrick Harriot, to name a few!