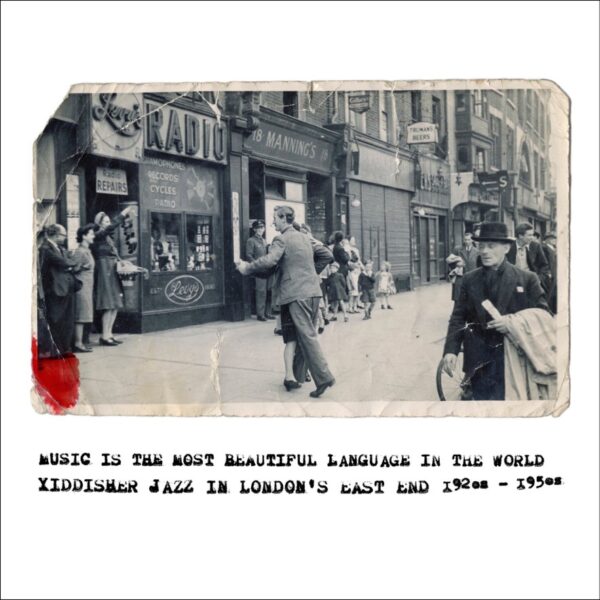 Music Is The Most Beautiful Language In The World: Yiddisher Jazz In London’s East End 1920s-1950s

A vibrant soundtrack to the Cockney Jewish experience, when the swinging hot dance bands were still all the rage, and the Yiddish language was spoken on the streets of Whitechapel. Feast on long forgotten 78 rpm discs that have only recently been unearthed, starring a host of recording artists united for the first time on ‘chai fidelity’ vinyl and CD.

Hear the legendary dance band figures of the era like Bert Ambrose and his Orchestra, and Lew Stone and his Monseigneur Band, to the relatively unknown Jewish speciality acts like the Johnny Franks and his Kosher Ragtimers, and Rita Marlowe, the siren of the Yiddish song. And just like the old time Yiddish Theatre where the audience were left with both a smile on their face and a tear in their eye, we can delight in the cheeky street patter of the incomparable slapstick drummer Max Bacon rejoicing in the East Enders love affair with ‘Beigels’, we celebrate the world famous Petticoat Lane street market with not one, but two 1920s fox trots – but also shed a tear with Leo Fuld, the remarkable Dutch Yiddish singer, whose recordings in post-war London were haunting reminders of a way of life decimated by the Holocaust

‘Music is the most Beautiful Language in the World’ is compiled by Alan Dein, the multi award winning radio documentary presenter, whose own family harks back to the major wave of immigrants fleeing the pogroms in Eastern Europe from the end of the 19th century. The album title is inspired by a 1920s Yiddish slogan of an East London gramophone record shop. A time when Whitechapel was a fertile breeding ground for singers, songwriters, conductors, and cantors to musicians, managers, proprietors of record shops and club owners – and according to Dein, “their stories are now entwined with the development of the British recorded music industry. But for the first time ever, we can the discover the remarkable sounds of Jewish-themed jazz recorded in London between the 1920s and the 1950s – which thankfully had been preserved within the grooves of ancient discs”.

The accompanying booklet designed by Will Bankhead includes a detailed essay by Dein, illustrated with rare photos and memorabilia. This release is co-compiled by Howard Williams, better known for his Japan Blues radio show on NTS, and a series of compilations spanning Moondog (The Viking of Sixth Avenue), cult Japanese jazz singer Maki Asakawa, and glimpses into the worlds of Japanese surf rock (Takeshi Terauchi), rockabilly (Masaaki Hirao), and soul funk and disco (Lovin’ Mighty Fire).